Birds observed in and near Laitkynsew, Cherrapunjee, 15-20 march 2007

Laitkynsew is a great place for birders. The landscape is diverse: deep valleys with forest and boulder filled streams, villages surrounded by cultivation, second growth and bamboo groves, eerie steep cliffs with waterfalls and, on top of it all, a barren plateau clad with grassland and pines. Since the altitude varies from 200 m a.s.l. in the valley bottoms to 1200 m on the plateau, the faunal composition is far from homogenous, the birds one encounters change with habitat and altitude.

During my short stay I was birding almost constantly. The result is an impressive list of 197 species, a high score reached through my effort to cover all levels (12 species were only seen in Mawmluh), and all types of habitat. If I had stayed on the grounds of the resort in Laitkynsew the number would probably not have exceeded 50 species. There was, however, certainly more to be seen out there, and more species can be added in other seasons. 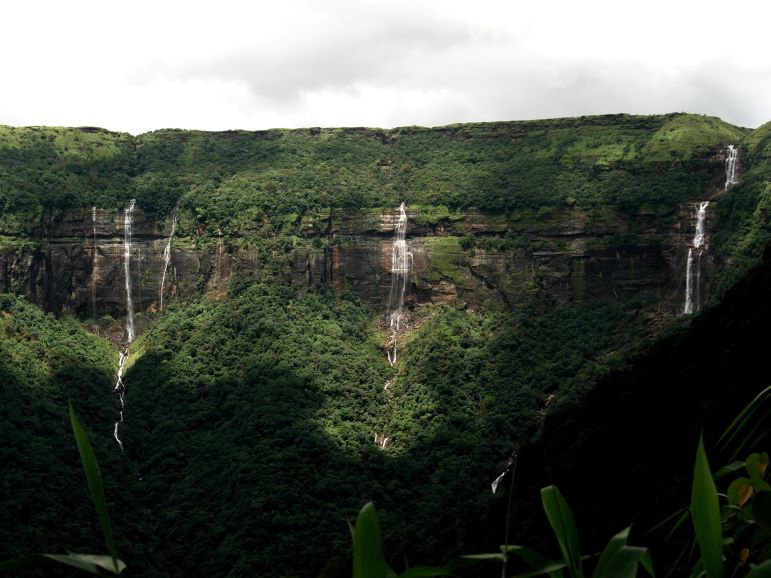 Why birding in Cherrapunjee ?

Meghalaya is situated in a transition zone with a bird fauna composed of species belonging to several faunal elements. Many species belong to a western Indian fauna, while others represent a south-eastern, Indo-chinese or Indo-malayan, fauna. The western birds tend to be found in drier, more open habitats, while a large proportion of the southeastern ones are found in humid forest. In the Indian subcontinent, some birds in the latter group reaches the Ghats and Sri Lanka, but most of them are only to be found in the northeast. A third faunal element includes a number of hill birds, found on the lower slopes of the Himalayas and on the slopes and summits of the northeast Indian hills, of which Meghalaya is a part. 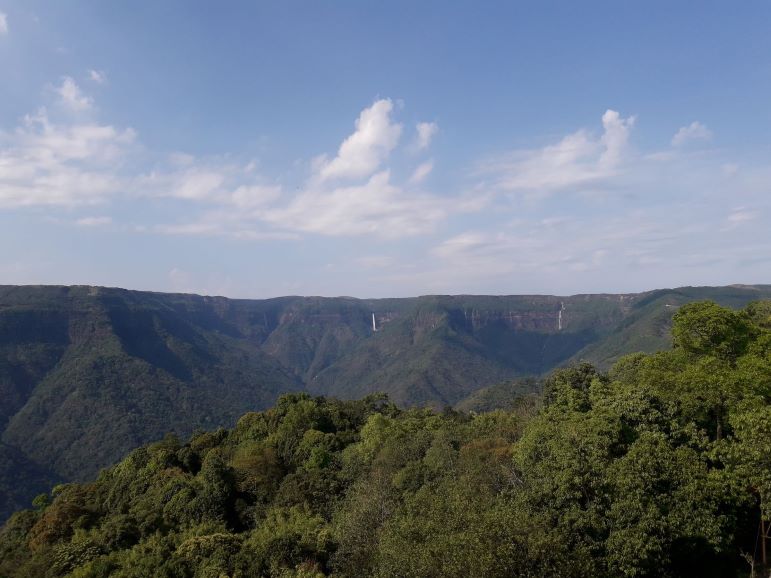 Most interesting, however, at least for an experienced birder, is a more local fauna confined to the hill tracts of northeastern India and Myanmar. Some of the species in this group are endemic to this region (i.e. they are found nowhere else), but most of them reach southwestern China and northern Thailand. In general, they have a montane (montage?) distribution, and are restricted to areas with high rainfall, such as the southern slopes of the Khasi hills. 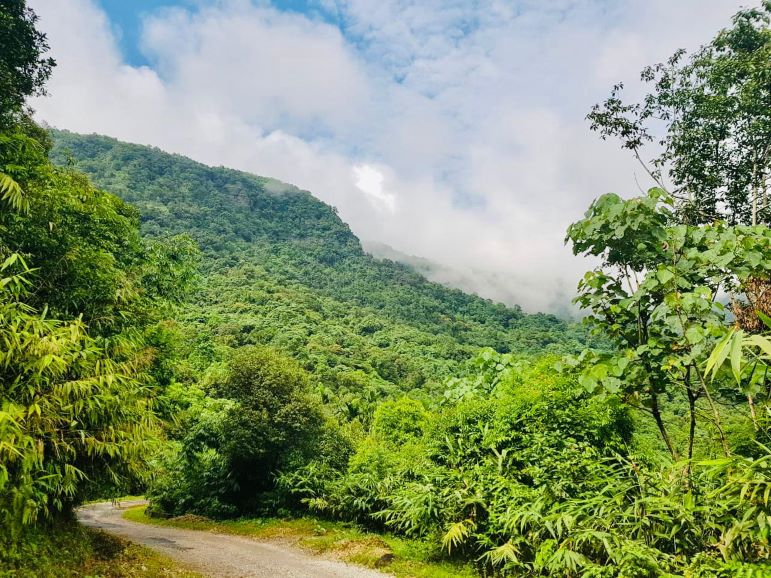 Finally, a large portion of the birds found in Meghalaya during winter are migrants from nesting grounds further north. They arrive from the Himalayas, Tibet, China or even Siberia. Many of them are wintering, i.e. spending a long period here, holding territories or straying around, depending on the species. Others are only passing through on their way to and from wintering grounds further south. 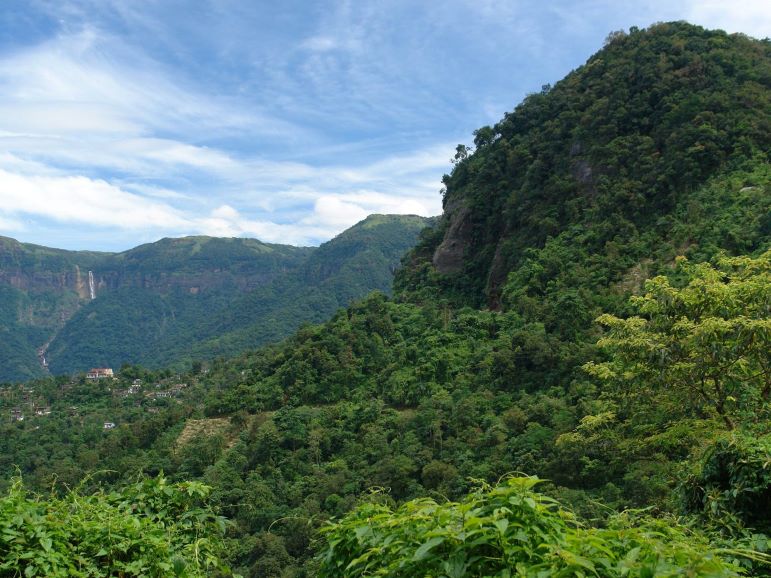 The coexistence of these faunal elements in a small region makes Meghalaya, and particularly the humid southern flank of the Khasi Hills, an ornithological hotspot. Laitkynsew near Cherrapunjee is located right on this slope, making the nice and friendly Cherrapunjee Holiday Resort an optional place to stay for any birder. And, it’s not raining all the time! In fact, during winter, Cherrapunjee is mostly dry, with nice and sunny weather. Since that season coincides with the time when birds from Siberia and China hang around, winter is the period to spend birding in Cherrapunjee. 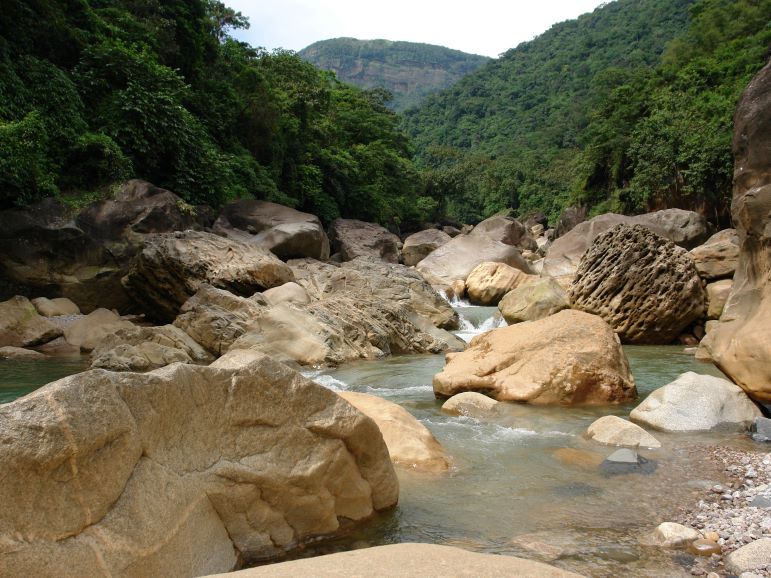 I found the Laitkynsew area especially good for flycatchers, babblers and other insectivores, but frugivores like pigeons were scarce, probably due to the season. Only a few owls were heard, and no nightjars. These, and skulkers like bush warblers and cuckoos, will probably be more conspicuous during the breeding when they are calling. There were only a few raptors around, and no water-birds whatsoever. According to Denis many migrating birds are passing in February, when flocks may abound on the grounds of the resort, but I have no clue to the identity of these birds. During my stay, Phylloscopus warblers were abundant, but as usual a pain to identify. After having seen the most likely species I started to ignore them, but they made up a large portion of the birds in bird waves. My experience of the Laitkynsew area is very limited, but I can point out a few localities that seem more fruitful. Starting from below, the area around the root bridge far below in the valley south of the resort was very good. The trail (3 km), which for the most part is a steep staircase (altitude difference: 350 m), passes through second growth, bamboo groves and grounds with Areca palms (grown for betel nuts), and all these hold birds, but it is the lowest section, where there still are large trees left on steeper slopes, which is the best. Parts of this forest can be viewed across clearings, and several species were only seen down there. Similar forest as well as patches with bamboo, can also be found on the slope to the northwest of the resort. A warning only, the slopes and stairs are very steep. 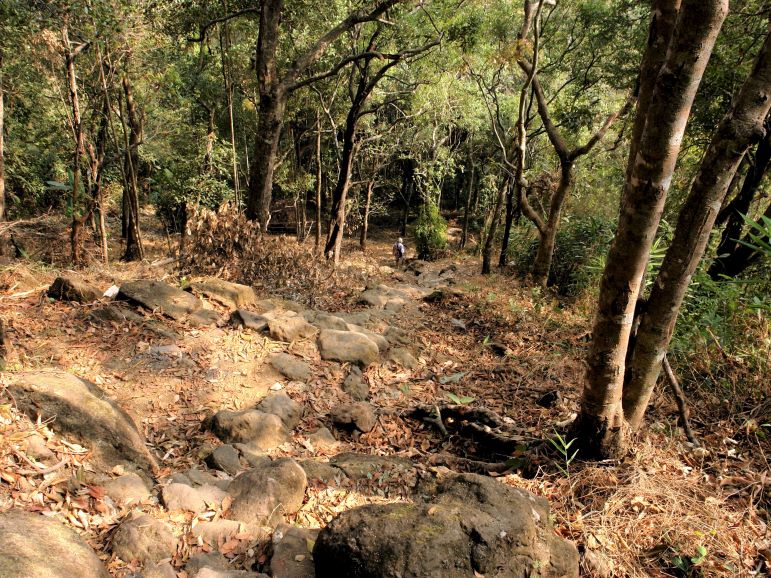 If you prefer more level ground, work along the road to Lumwahkrem, which leads to the south (right) from a junction about 500 m back from the resort. A walk along this road in the morning can be rewarding, and there are several paths leading into the jungle on both sides. Some sections still hold larger trees on humid ground, but most of the road passes through second growth, and a large clear-cut gives me creepy feelings… 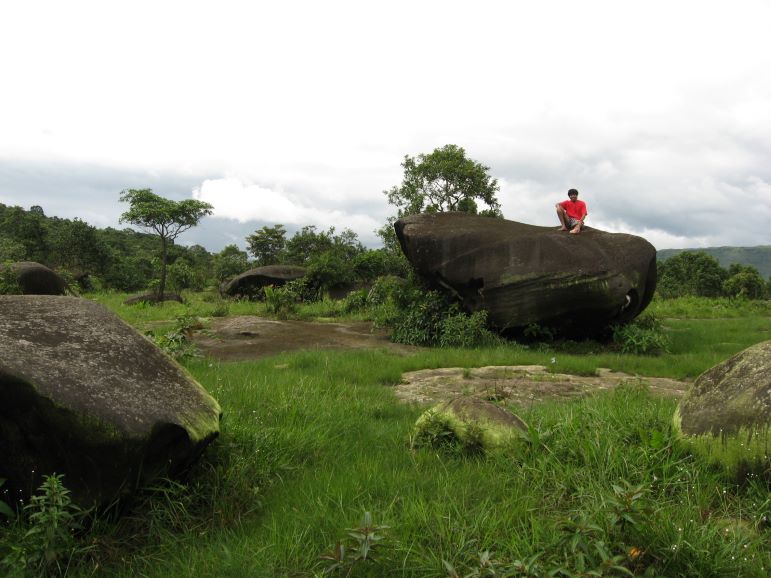 From the road junction mentioned above, a trail which soon divides into three paths leads off to the northeast. The path to the left, the “Pony Trail”, may at first be difficult to spot, but starts after only a few meters, follows the road ditch and disappears into the jungle. This old, partly stone paved path, closely follows the escarpment high above the road for 2 km, where a staircase descends to Mawshamok village. The path, and the ground above, is very good for birds, but there are locals around, cutting down trees for fuel.

The main path from the above junction, the “Ridge Path”, passes a cemetary, continues as a short staircase, and follows a power line. It leads to a cultivation with a few houses, after which it follows the crest of the ridge towards Mawshamok village, above which it ends at spectacular viewpoint (not visited by me). For the most part the terrain here is rocky, and is more exposed, with lower and more scattered trees, than that along the Pony Trail. The habitat is thus very different. Since the two paths run parallel, it is possible to work through the forest in between. The best way to do this is to use the minor paths that connect them. A rough map showing the Pony Trail and the Ridge Path can be obtained at the resort

The third path leading from the junction, is a level path branching to the right from the Ridge Path at the point beyond the cemetery where it reaches the powerline. It continues parallel to, but higher than, the Lumwahkrem road, an arrangement that makes it convenient to work through the forest and clearings in between – you can’t get lost. After a little more than a km, the path arrives at a cultivation, before which there is dense and humid forest to be found on the slope up to the left.

The Pony Trail is excellent for canopy watching, as is the road from Laitkynsew towards Mawshamok (3 km). Good views can also be obtained during a long (10 km) but very rewarding road walk from Mawmluh on the rim of the top plateau (the village with the cement factory) back to Laitkynsew. There are good views from many points along this stunning road. The upper stretch is also essential for several “high altitude” birds, and many species were only seen up there. Along some sections close to the top the ground is more level, making it possible to enter into forest of a very different appearance from that found below Laitkynsew. At some points shortcuts through hairpins can be taken by using the stairs.