Before the onset of the summer monsoon over India, a low-pressure zone forms on either side of the equator, roughly along 5º N and 5º S. Meteorologists refer to this as an equatorial double trough. The double trough is frequently observed in satellite observations of clouds. Prior to the onset of the monsoon, the near equatorial trough north of 5º N weakens, but the trough near 5º S remains fairly active. 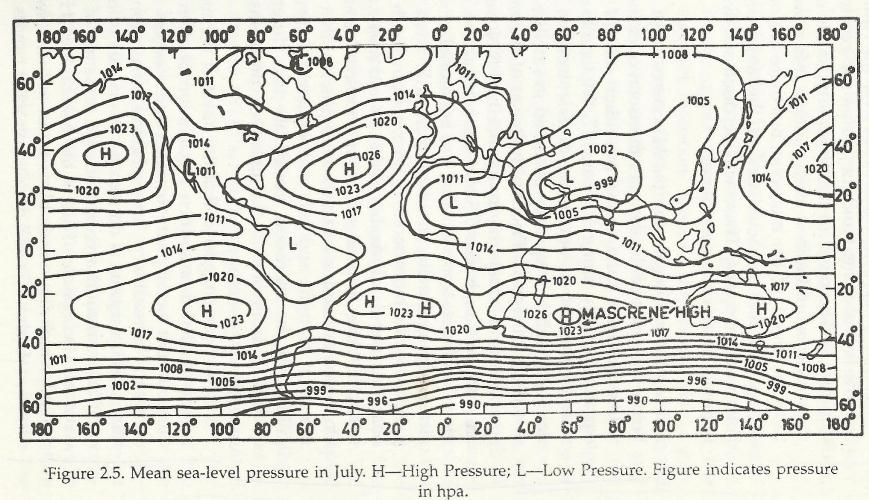 In the southern hemisphere, off the coast of Madagascar there arises a zone of high pressure which is referred as the ‘Mascarenes High. Around this Mascarenes High an anticyclonic air circulation becomes predominant. Opinion is still divided on what causes the air to accelerate round the Mascarenes High in an anti-clockwise direction. Some opine that this is brought about by the passage of migratory low-pressure systems off the coast of South Africa. The Indian Summer Monsoon, which is an unique annual meteorological phenomenon, starts its journey over ‘Mascarenes High’ near Madagascar in the southern hemisphere.

The monsoon wind initially proceeds westward. As it crosses the equator, the spinning of the earth on its axis causes it to deflect towards north. This force has been named ‘Coriolis Force‘. On the surface of the earth, winds always try to blow from an area of high pressure (HP) towards an area of low pressure (LP) because of gradient force. Whilst blowing from HP areas to LP areas, the wind is deflected by Coriolis force or Geostrophic force. Coriolis force is minimum at the equator and increases as the latitude increases becoming maximum at the Poles. Coriolis force always acts at right angles to the direction in which the wind is blowing. It deflects the wind to their right in the northern hemisphere and to their left in the southern hemisphere.