The principal monsoons of the world are the summer and winter monsoons of Asia and the monsoonal circulations over West and East Africa. These monsoons appear to be dominated by circulations that are either aligned in a north south or an east-west direction. The rising branch of each circulation is located near a source of heat while the descending limb occurs over a heat sink. In honour of Mr. George Hadley and Sir Gilbert Walker these cells are now named as Hadley and Walker Cells.

Hadley and Walker Cells reveal a pattern in the atmosphere’s response to differential heating. 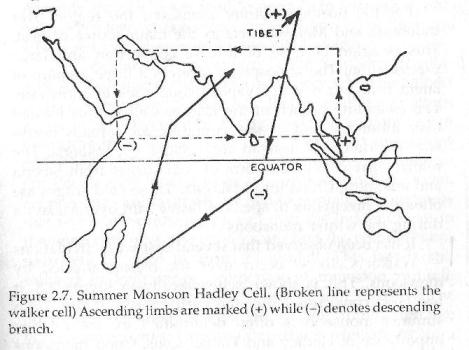 For the Asian Summer Monsoon, the plateau of Tibet acts as an elevated heat source. The ascending air above the source gradually spreads southwards to join a descending limb over the north Indian Ocean near Mascarenes High. The southwesterly winds at the surface form the return current to complete the Hadley Cell. In addition, there is an east-west Walker Cell that appears to influence the summer monsoon. The ascending branch of the Walker Cell is located over the semi-arid regions of the northwest India, Pakistan and the Middle East.

For the northern winter monsoon, the region over Indonesia and Malaysia acts as the main source of heat. The ascending branch of the Hadley Cell is located over Indonesia. As the ascending air spreads northwards it descends near an anti-cyclone over Siberia. The return current is in the form of cold surges from Siberia and adjoining China into Malaysia. These cold surges are often the precursors of spells of heavy rain over Malaysia during the winter monsoon.

It has been conjectured the performance of the Asian Summer Monsoon is often determined by the relative importance of the Hadley and Walker Cells. Good monsoons appear to be associated with more intense Hadley Circulations and relatively weak Walker Cells, while poor monsoons occur when the Walker Cell is strong and the Hadley Cell is weak. The dynamics of this type of cellular convection on a planetary scale is often intimately linked with the inter-annual variability of monsoons.

Excerpt from ‘The Monsoons’ by Dr.P.K.Das, former Director General of the National Meteorological Service of the Government of India. Published by National Book Trust, India. Price: Rs.75/