In 1799, Serampore in present day West Bengal was under the protection of the King of Denmark. The early British rulers of India were not in favour of the Christian missionaries setting up missions in India. So, William Carey (1761-1834) a Baptist hailing from Northamptonshire established his mission at Serampore in 1799, which came to be known as ‘The Cradle of Modern Missions’.

In 1813, Carey made an attempt to evangelise the Khasis by deputing Krishna Chandra Pal to Pandua, a trading outpost at the foot of the Khasi Hills below Cherrapunjee. Pandua situated in the Sylhet plains, in those days belonged to the Kingdom of Sohra (Cherrapunjee) but is now in Bangladesh. In those days entry to the Khasi Hills was primarily from the Sylhet plains through the Dwars – trading gateways – alongside rivers exiting into the plains from the hills and one traveled to Kolkata (Calcutta) through East Bengal – the present-day Bangladesh.

During his eight-month stay, Krishna Chandra Pal succeeded in baptizing seven individuals two of whom were Khasis. On Pal’s return to Serampore, William Carey felt encouraged to begin translation of the Bible into Khasi language using Bengali script. Pal never returned to the Khasis. It was not until 1832, William Carey could sponsor Alexander B. Lish, an eighteen-year-old Anglo-Indian as a missionary to Cherrapunjee. William Carey contributed fifty rupees every month out of his pension to support Lish’s mission in the Khasi Hills. Towards the end of Carey’s life a woman in England sent him £500 to enable Lish’s work to continue.

Lish stayed at Cherrapunjee for six years learning the language, opening a number of schools and retranslating the New Testament (Bible) again using Bengali script, which again proved inaccessible to the Khasis accounting in part to Lish’s relative lack of success in his mission. William Carey had significant links with Liverpool in Wales. The treasurer of Serampore group Samuel Hope and the Secretary of the Welsh Mission Rev. John ‘Minimus’ Roberts lived very close by at Liverpool, perhaps provoking the interest of the Welsh Mission in Khasi Hills.

Thomas Jones, a young Welsh man from Aberriw, in Wales who was passionate to be a missionary in India was among the first batch of students of Calvinistic Methodist College at Bala. His offer to work in India was turned down by the London Missionary Society on medical grounds. The strong willed Thomas Jones along with his supporters managed to convince his congregation to incorporate ‘The Welsh Missionary Society’ and to decide to send him to work as a missionary in India. The choice then was to choose between the Khasi Hills, the Manipur Valley and the central province of Malour. When there was nothing in particular and special, to choose one of these three proposed destinations, a generous offer of ₤50 rebate in the fare to Calcutta offered by Capt. J. Johnson of a cargo vessel helped the directors of the fledgling Welsh Missionary Society to embark on their first Overseas Mission to the Khasi Hills. This was the culmination of the public interest in the missionary endeavours in Africa, Asia and the South Seas shown by the pious, religious and hard up common people of an impoverished Wales of those times. This one generous step had great ramifications in the distant Khasi Hills amidst a people totally alien to them.

Thomas Jones traveled with his young wife Anne Jones to Cherrapunjee from Calcutta down the Hoogly river, Sunderbans, up the river networks to Surma river and fresh water jheels (inland water bodies) to the foothills below Cherrapunjee. Then they had to climb up the mountains on foot or had to be carried in ‘Khoh Kit Briew’ – a Khasi special purpose basket for carrying people – up 4500 feet. They landed at Cherrapunjee on 22nd June, 1841. Thomas Jones made himself useful to the Khasis with instructions in agriculture, mechanical arts, introducing usage of coal in limestone kilns, introduced written Khasi using the Roman alphabets and endeared himself to the Khasis. He is now known as the ‘Father of Khasi Alphabets’. Perhaps, noticing that the hill people were making liquor in unhealthy ways, also taught them the art of distilling. He started translating the Bible into Khasi language, which task was completed by William Lewis and his successors. Early in 1842, Thomas Jones published his First Khasi Reader and Rhodd Mam. They were the first publications in Khasi language.

Dr. John Roberts another Welsh missionary had then contributed so much to the Khasi literature, he is now given the honorific title of ‘Father of Khasi Literature’. The Welshman’s (Thomas Jones’) experiment with Roman script for reducing spoken Khasi to writing started gaining wider acceptance and eventually led to the adoption of Roman script instead of Bengali script for the neighbouring Garo, Mizo, and Naga languages.

One can see the first Presbyterian Church in Meghalaya at Nongsawlia, Lower Cherrapunjee that was established in 1848 and was reconstructed in 1898 after the earthquake. Alongside stands the primary school established in 1843 by Thomas Jones. The High School and the first Theological College established in 1897 are just around the bend on the road. A few years back the Theological College has been shifted to Shillong and Thomas Jones School of Mission & Evangelism has been opened in the premises. The construction of the building with wide verandahs and large halls is of the times of Welsh missionaries. One can see on the hearth in the main hall a portrait of Dr. John Roberts painted by Mr.George Kharkongor, staring at you wherever you stand in the large hall. One of rare pictures of Thomas Jones is also found here.

The Welsh had contributed to the dress habits of the Khasis, some textile designs peculiar to Wales; the hymns sung in the churches have Welsh tunes. The lace curtains found in the hills are also a remnant of this influence. You can see crockery and china displayed in the living room of Khasis. I am told by my welsh guests that this is typical Welsh.

The Welsh missionaries proceeded to expand their mission activities to Shillong, which has now many institutions set up by them, which have immensely contributed to the welfare of the Khasi and Jaintia people besides others. Any mention of Khasi people cannot go without the mention of the beneficial influence these committed Welsh people had on us. There is a perceptible deference to the many Joneses, Lewises, Robertses, Hugheses, Stephenses, Griffithses, Thomases, Evanses and Williamses in the hearts of Khasis for all the selfless good that they had done to us.

The present day Welsh should travel to the Khasi Hills to wonder and be amazed by the lasting contribution of their ancestors to the people of this distant land and how it is being preserved and kept alive in the hearts, hearths and the churches of our Khasi and Jaintia people.

P.S.
I got much of this information from the book “Gwalia in Khasia” written by Mr.Nigel Jenkins of Swansea. I had the privilege to spend a couple of days with Mr.Nigel Jenkins in November 2012 at his Mumbles, Swansea residence. We travelled in his car across Wales from Swansea, from early in the morning till late in the evening. He took me in his car to the birthplace of Rev.Thomas Jones in Powys – Llifior Mill, Aberriw. We had tea with the current owners of the house Mrs.Jan and Mr.Mike Harris Edge. The water wheel driving the mill with water from the nearby stream was still in place though not operational. The large gears to transfer the motion of the wheel to drive the mill were still there. Mr.Mike showed us the carving of the initials ‘T. J.’ on one of the roof rafters in the loft which was accidently discovered just a week before, when they had undertaken some repair works.

We also travelled to the Church where the decision was taken to establish the Welsh Overseas Mission and to send Rev.Thomas Jones as a Missionary to the Khasi Hills and to Corris, the land of slate mining from where hailed Rev. John Roberts, revered in the Khasi Hills as the Father of Khasi Literature. 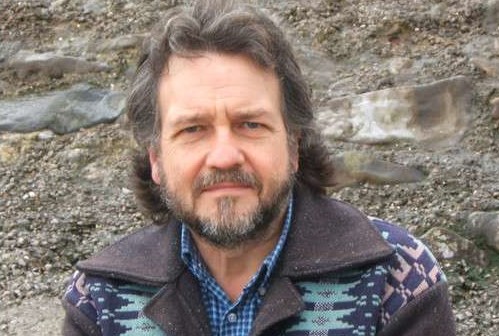 Nigel Jenkins was born into an Anglo-Welsh family in Gower, the son of an auctioneer and farmer. He taught himself Welsh and went on to become a leading literary figure in Wales. He was also well known as a Poet and Writer and despite acquiring fame in many other of his activities, he preferred to call himself a Poet. His superb deep bass voice always captivated his audiences.

He started his career as a journalist in Leamington Spa. He later returned to Swansea and learned Welsh. He taught Creative Writing at the University of Wales, Lampeter and was ultimately the Director of Creative Writing Course at Swansea University.

The Travel Book ‘Gwalia in Khasia’ (1996), which was written as a study of Welsh Missionaries in India won a National Award. It was reprinted in India by the name ‘Through the Green Door’ by Penguin Books.

Nigel Jenkins died on 27th January 2014, at an early age, aged just 64 years, after suffering from pancreatic cancer. May His Soul Rest in Peace.

…. Continued after the Menu. 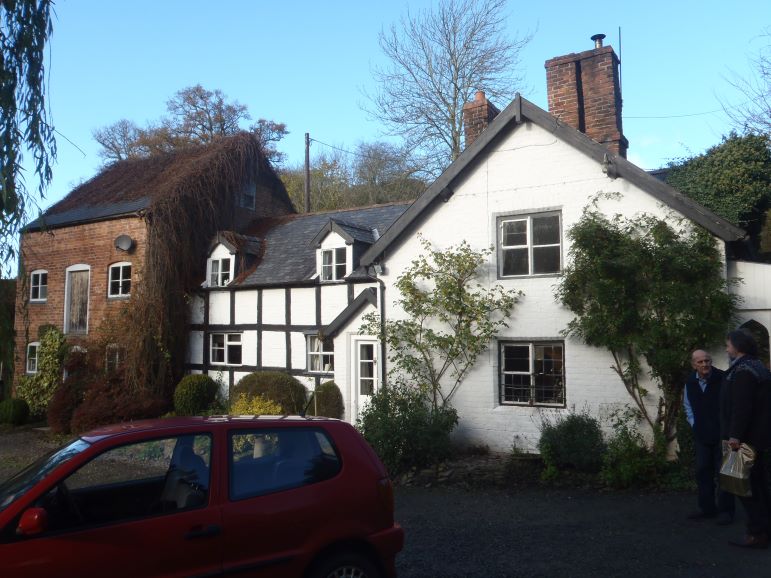 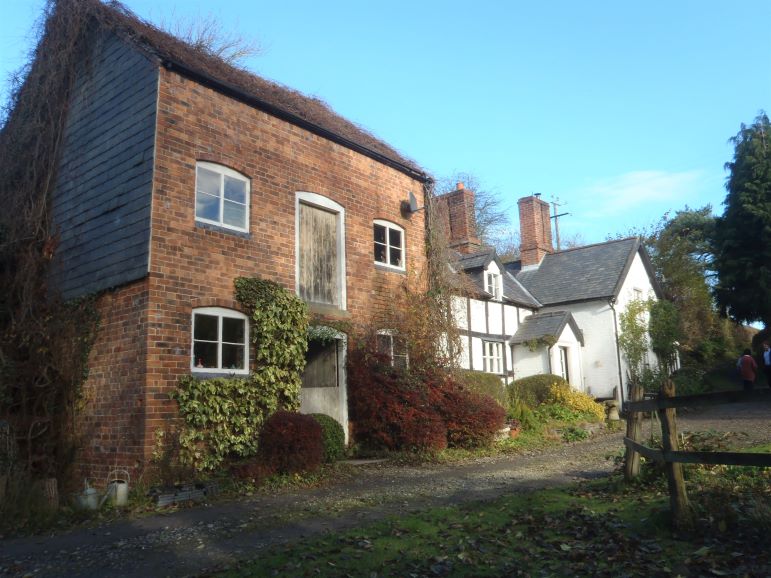 Current Owners who live there – Mike and Jan Harris Edge 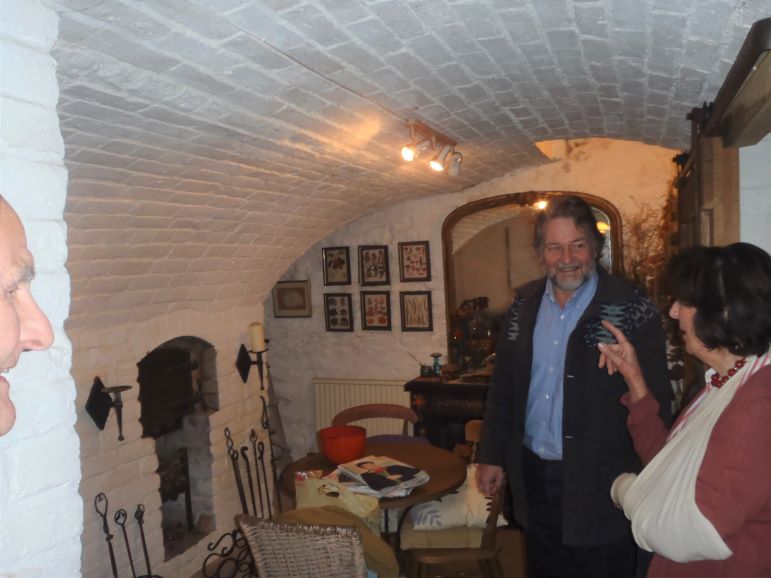 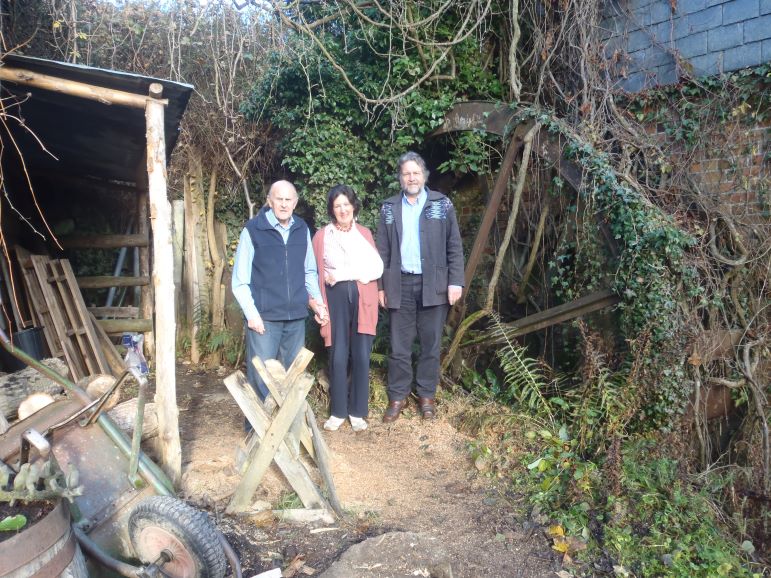 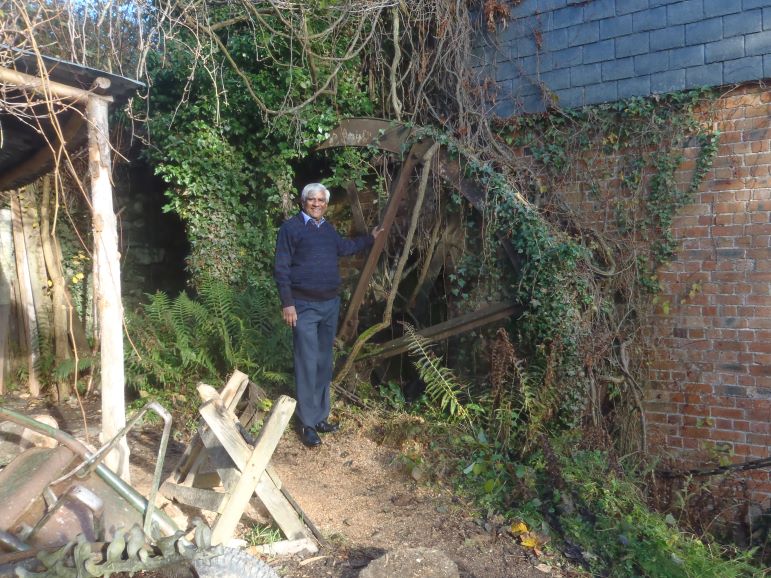 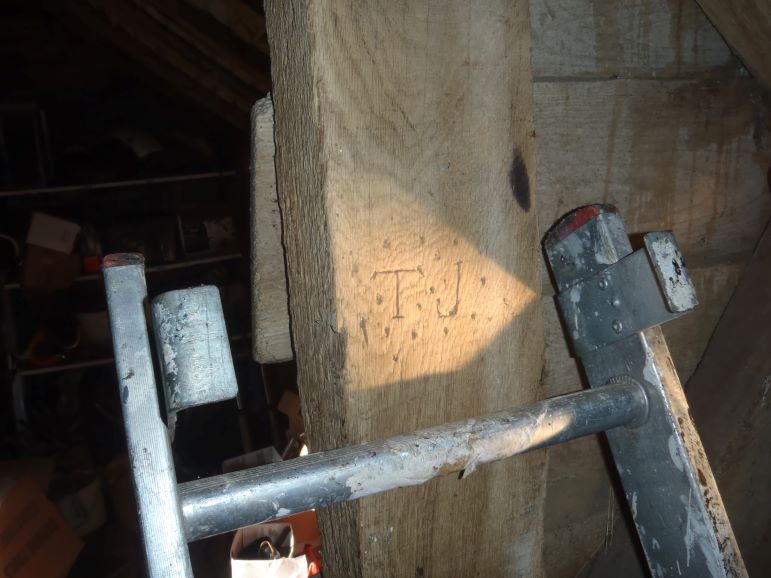 Inscription of T.J. found in the Grain Barn 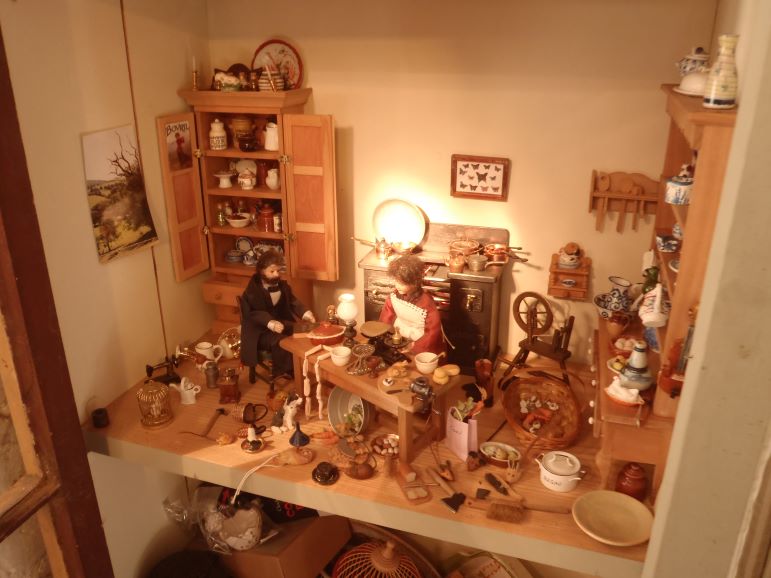 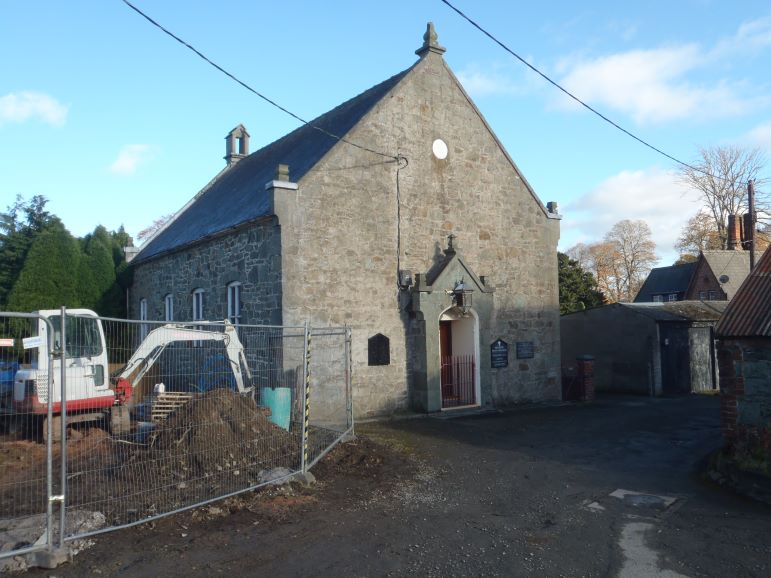 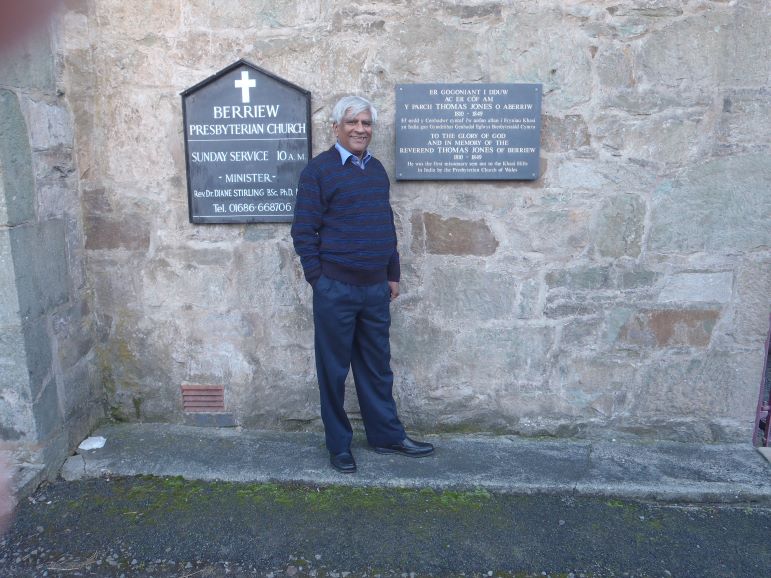 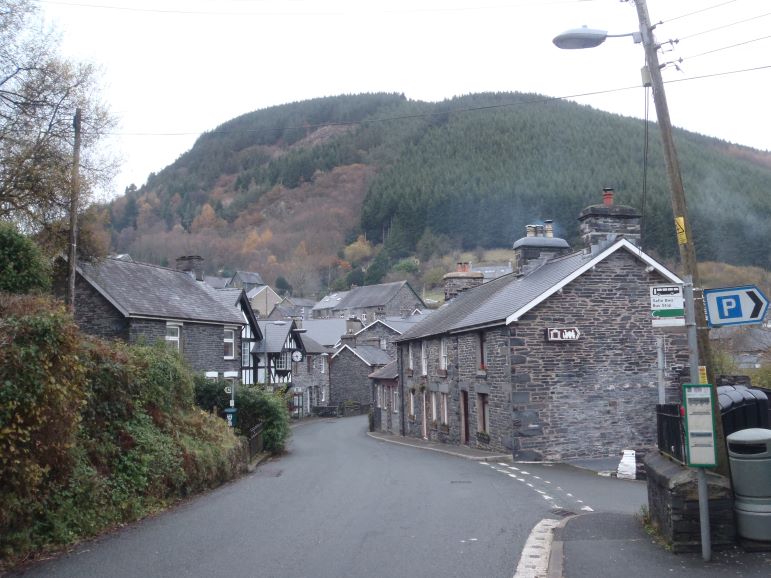