At Daiñthlen, the river spreads out and plunges into a narrow, jungly gorge. ‘Thlen’ a gigantic serpent, perhaps a python, lived in a cave nearby. The thlen used to ambush people on their way to market. It had a strange habit of devouring half the number of people passing by and leaving the rest untouched. If two persons were passing by, it would attack one and let go off the other. If there were ten people, five fell prey to its voracious appetite. All one can to do to pass safely through the place was to walk alone. This caused great fear and panic among the people of the area and they were desperate for putting an end to its tyranny, but were clueless. 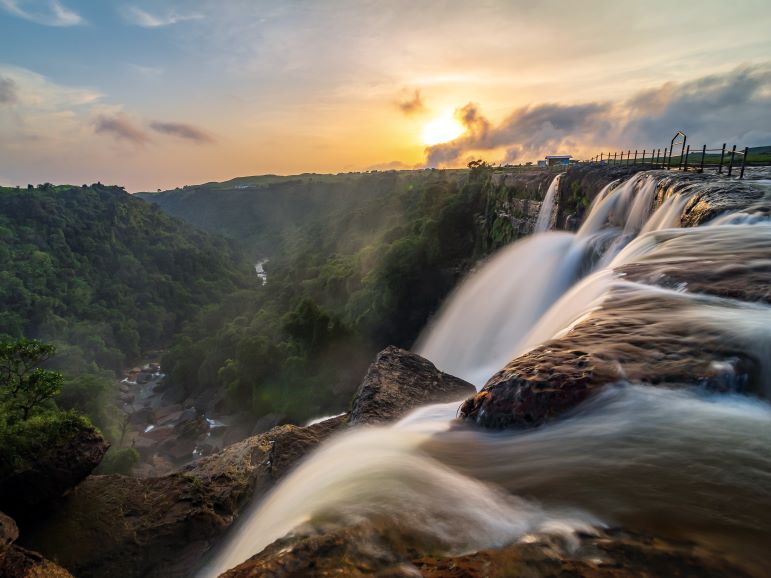 U Suidnoh a fearless person of Laitryngew, a village you pass through 7 km before reaching Cherrapunjee came forward to tackle the thlen. The place he lived is even now called Law Suidnoh (pronounced Lao Suid-noh) and is protected as a sacred grove. He took along with him a herd of goats. He developed friendship with the thlen by feeding it with goat meat. Over a period of time, the serpent became friendly to U Suidnoh and on a call from him the thlen would slide up the cave with its mouth gaping wide open for a feast of meat.

Once U Suidnoh was confident that the thlen would come out with its mouth wide open for a feed whenever he called out to it, he heated a lump of iron in a furnace till it became red hot like meat. He then approached the cave and called out to the thlen. The thlen as usual came up with its mouth wide open. U Suidnoh dropped the glowing red hot iron lump down the serpent’s mouth into its throat.

The thlen swallowed the red hot iron lump which burnt its inside making it to writh in pain inside the cave. The earth shook as if shaken by an earthquake. When the serpent died after that, the people came from Sohra and nearby, pulled it out of the cave to the dry river bed and cut the thlen into pieces. The rocky bed of the river now also looks like pieces of chopped meat. The place since then is known as Daiñthlen, meaning – the place where – ‘Thlen was cut’. The hollows were used to pound the spices and masala. It was believed that every bit of the flesh of thlen was to be eaten up, else the thlen will be able to recreate itself. 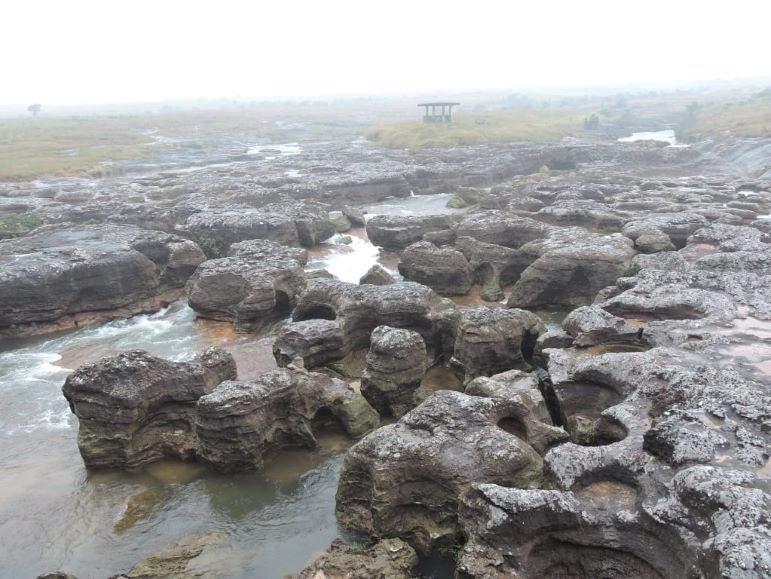 So there was great feasting in which everyone partook. The people were delighted that at last they were freed from the tyranny of the thlen by eating up the entire meat of the thlen; but they were mistaken. An old woman wanted to give a portion of the meat to her son who could not join the feast and took it to Sohra but forgot to give it to her son. The piece of meat of the thlen that was forgotten reincarnated as the thlen and demanded ‘Khasi blood’. Since it was killed with the help of iron it demanded the victim should not be killed with any iron weapon. The thlen thus started residing in the old woman’s house and had to be satiated with human blood. It could change forms to become a cat, fish, leech or snake. The woman thus unwittingly became the first of the ‘Thlen keepers’, who are feared throughout the region. The thlen keepers are required by the thlen to provide ‘Khasi human blood’ whenever it craves for it or be struck with some misfortune or other by way of illness, accident or sudden poverty. When properly looked after the thlen was supposed to confer great riches and wealth on its host.

When the thlen is seeking satiation, the thlen keeper looks for a ‘nongshohnoh’ meaning the beater, because the murderer has to kill his victim with a club and can not kill him with any iron weapon. The nongshohnoh, who need not be a Khasi, fortifies himself with strong liquor, ritually mixes some turmeric with rice, then goes in search of his victim, who has to be a Khasi. People fear to traverse deserted paths alone because nongshohnohs prefer to stalk their victim in such locations and spring a surprise on the victim and confuse him by throwing the ritually prepared rice on him. The victim is then clubbed to death. With a pair of silver scissors, the nongshohnoh cuts off the victim’s eyebrows, earlobes, finger nails, toe nails and lips; he uses a silver lancet to pierce the man’s nostrils and collects into a bamboo tube Khasi blood. It is told that some use bamboo lancets to do the job.

Meanwhile, back at the Thlen keeper’s house, often at the dead of night, preparations are made to receive the propitiatory offerings. All doors are opened, clothes are spread on the floor of the house and a brass plate is laid on the ground. On this plate, when the nongshohnoh arrives, is placed the murderer’s bloody haul, then a drum is beaten to call the Thlen from its lair. As the demon expands devouring the spirit of its victim, its keepers implore its blessings and a restoration of their health and prosperity.

A family member of the Thlen keepers wanting to get rid oneself of the influence of the thlen, is required to leave the house stark naked and should not partake in any of the wealth or property from the house of the thlen keepers. This only would free the person from the curse of the thlen. Though thlen keeping is considered a thing of the dark past, occasionally one hears of death in the hands of nongshohnoh.

Excerpt from the article “Notes on the Kasia Hills, and People” by Lt. Henry Yule, the Bengal Engineers (Sir Henry Yule, the Geographer): Published in the Journal of the Asiatic Society of Bengal Vol. XIV Part II – July to December, 1844

A very curious superstition regards the boa, or some other large snake. It is believed, that, if he takes up his abode with any man, great wealth will accrue to the household; and that there are evil minded men who go about in search of whom they may slay, cutting off the nose, lips, ears and hair of their victims, with these propitiate the serpent, and prevail on him to be their guest. And it is difficult to persuade a Kasia to go into the jungle alone, generally for fear of meeting with one of these villains, who are supposed to hide in all solitary spots looking out for prey. The way in which the serpent is believed to bring wealth to his votary, is after the manner of the prophet’s blessing on the widow. Whatever he may sell from “basket to store, kail or potatoes,” his stock diminishes not. One would hope to find his ill-gotten treasure turning to “slate stones”, as wizard’s gold wont but we hear nothing of this