The monsoon wind that is deflected to the north as it crosses the equator is further deflected to the east by the mountains of Africa. The progress of the southwest monsoon towards India is greatly aided by the onset of certain jet streams including the crucial Somali jet that transits Kenya, Somalia and Sahel and exits the African coast at 9 degrees north at low level and very fast. J. Findlater, a British meteorologist observed this low level jet stream was found to be most pronounced between 1.0 and 1.5 km above the ground. It was observed to flow from Mauritius and the northern part of the island of Madagascar before reaching the coast of Kenya at about 3º S. Subsequently it ran over the plains of Kenya, Ethiopia and Somalia before reaching the coast again around 9º N. The jet stream appears to be fed by a stream of air, which moves northwards from the Mozambique Channel. 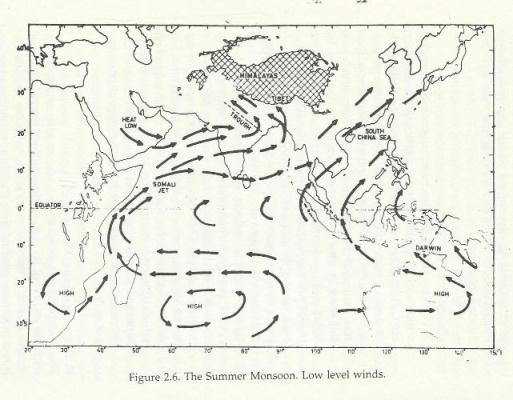 The major part of this low level jet penetrates into East Africa during May and, subsequently, traverses the northern parts of the Arabian Sea before reaching India in June. Observations suggest that the strongest cross equatorial flow from the southern to the northern hemisphere during the Asian Summer Monsoon is in the region of the low level jet. This has intrigued meteorologists, because it is not clear why the major flow of air from the southern to northern hemisphere should take place along a narrow preferred zone off the East African coast. The importance of the low level jet arises from the fact that its path around 9º N coincides with a zone of coastal upwelling. As the strong winds drive away the surface coastal waters towards the east, extremely cold water from the depths of the sea rise upwards to preserve the continuity of mass. This upwelling is brought about by strong low level winds. After the low level jet moves towards the Indian coastline around 9º N, it separates into two branches. One appears to move to the northern parts of the Indian Peninsula while the other recurves towards the southern half of the Indian coastline and Sri Lanka. It is still not clear why the jet separates into two branches. Findlater analysed the wind profile for the months of July and August and found a relationship between the cross-equatorial airflow, between 1.0 and 1.5 km, over Kenya and the rainfall over western India. He opined that an increase in the cross-equatorial flow was followed by an increase in rainfall over the west coast.

Oceanographers have been interested in yet another phenomenon, which appears to have some relationship with the low level jet stream off the coast of eastern Africa. This ocean current named the Somali Current, flows northward from the equator to 9º N, where it separates from the coast. It is a fairly strong current with a velocity maximum of 2 m m/s, but speeds as large as 3 m m/s have also been observed. The Somali Current may be considered to be a western boundary current of the Indian Ocean. But, its peculiar feature is a reversal in direction with the onset of the summer monsoon. In winter, this current is from north to the south running southwards from the coast of Arabia to the east African coastline; but with the advent of the summer monsoon it reverses its direction and flows from the south to the north. This suggests a relationship with the reversal of monsoon winds, but usually the oceans respond very slowly to changes in atmospheric circulation and oceanographers have wondered why the Somali Current reverses its direction and reaches its maximum speed nearly a month earlier than the onset of southwesterly monsoon winds.

Certain interesting changes take place in the upper atmosphere with the advent of the summer monsoon. Towards the end of May, a narrow stream of air, which moves from the west to the east over northern India, suddenly weakens and moves to a new location far to the north of the Himalayas. This is known as sub-tropical westerly jet stream. Its movement towards the north is one of the main features associated with the onset of the monsoon over India. As the westerly jet moves north, yet another jet stream sets in over the southern half of the Indian peninsula. This flows in the reverse direction from the east to west. It is called tropical easterly jet, and it exhibits periodic movements to the north and south of its mean location during the hundred-day monsoon season beginning with the first of June and ending around mid-September.

The altitude at which the winds attain their maximum strength in the tropical easterly jet is around 150 hPa, but the maximum winds associated with the sub-tropical westerly jet occur at a lower altitude of 300 hPa. A remarkable feature of the tropical easterly jet is that it can be traced in the upper troposphere right up to the west coast of Africa. HPa refers to ‘hecta Pascal’ and is a unit of measure of atmospheric air pressure

Excerpt from ‘The Monsoons’ by Dr.P.K.Das, former Director General of the National Meteorological Service of the Government of India. Published by National Book Trust, India. Price: Rs.75/