The word ‘monsoon’ comes from the Arabic word ‘mausam’ – meaning season. Our earth revolves around the sun in an elliptical orbit and is nearest to the Sun around the first of January and farthest from the sun on the first of July. 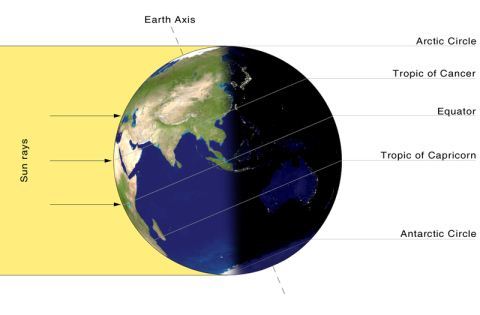 The weather is warmer in summer than in winter not because of the varying distance from the sun but because of the inclination of the earth’s equator to the plane of earth’s orbit around the sun. The plane of the earth’s equator is inclined at an angle of 23.5º to the plane of orbit. This means that the different parts of earth receive varying amounts of sunlight as the earth revolves around the sun in an elliptic orbit. When the northern end of the earth’s axis is inclined towards the sun it is known as summer solstice and occurs on 21st June every year.

On 22nd December, the northern end of the earth’s axis is inclined away from the sun. This day is known as the winter solstice. Thus one may assume that, in the northern hemisphere, June should be the hottest month of the year and December should be the coolest, because they are the months which receive the largest and least amounts of radiation from the sun. But, usually there is a lag because time is needed for the heating and cooling to become effective. For this reason the warmest months in the northern hemisphere are June, July and August, while the coldest months are December, January and February, that is, a little after the summer and winter solstices. June, July and August are thus important for the summer monsoons because the tropics are warmest at the time of the year.